Shopping Cart
Your Cart is Empty
Quantity:
Subtotal
Taxes
Shipping
Total
There was an error with PayPalClick here to try again

Thank you for your business!You should be receiving an order confirmation from Paypal shortly.Exit Shopping Cart

When’s the last time you felt God take you by the hand and offer you the delights of your heart? It happened for me this week when a friend asked me to accompany her on a trip to Washington D.C. where she was doing a residency for her M.A. in Catechesis at Catholic University of America.

Our journey began at 5:45 AM on Monday, June 28 and ended around 10:00 PM on Thursday, July 1. And what happened in between far exceeded my expectations. I had anticipated depth-full conversation with my friend as we traveled along, and I assumed that staying at the Theological College (the seminary of Catholic University) would provide its own perfect ambiance. I also figured that the Basilica of the National Shrine of the Immaculate Conception would provide many sacramental and inspiring moments. Blessedly, all came to fruition. What I purposefully didn’t anticipate, in my desire to be open to God’s serendipitous offerings, were some of the things that did, in fact, unfold. We’ll start with the people. My friend’s classmates - a watercolor artist, a family counselor, a retired commander of the Kitty Hawk and a past Vatican correspondent for the Associated Press - were friendly and inviting, interesting and interested. I warmed up to each of them immediately and enjoyed many meals in their pleasurable company. It felt like a gathering of old friends. We chatted freely and comfortably, sharing bits and pieces of our lives and dreams for catechetical improvements as we sat around the table in that grand eating hall with the stunning Gothic windows.

And it wasn’t just the classmates, I also spoke to the seminary manager, Scott, and learned that the Battle of Gettysburg was fought in the same sweltering heat that was presently the talk of the country. I even had a delightful conversation with one of the cooks who told me how he played a role in a previous university football team’s one win of the season by promising to serve steaks for breakfast if they won the game! Another highlight was meeting one of the professors, Dr. Jem Sullivan, who oozed of the most authentic genuineness and humility. Her passion for inspiring students was palpable and I found myself envying the students who were blessed to experience her in large doses. Honestly, every last one of these individuals added to the overall awareness of “gift” which is how this trip will be remembered.

What I couldn’t possibly have anticipated was that part of Dr. Sullivan’s experience package included a couple of side tours, one to the Saint John Paul II National Shrine (housed in a spectacular piece of architecture), and the other to the school’s prestigious library. To my delight, I was invited to join the group. The first tour (JPII shrine) happened on the first day of the residency, and it was worth a hearty walk from the seminary in sweltering heat! But what’s a little scorching compared to the opportunity to immerse yourself in JPII? We’re talking one of the most brilliant, influential and hopeful human beings to ever walk the earth. I was reminded at every turn why Kristen and I chose JPII as the patron saint of Luminous Ministries. On one wall it read:

“The whole mystery of Christ is a mystery of light. He is the ‘light of the world.’ Yet this truth emerges in a special way during the years of his public life, when he proclaims the Gospel of the Kingdom.” ~ John Paul II, Rosarium Virginia Mariae [The Rosary of the Virgin Mary], 2002.

“The Gospel is not a theory or an ideology! The Gospel is life! Your task is to bear witness to this life: THE LIFE OF GOD’S ADOPTED SONS AND DAUGHTERS”. John Paul II, Manila, Philippines, January 14, 1995.

And around the corner:

If you get the chance to visit this shrine, TAKE IT! 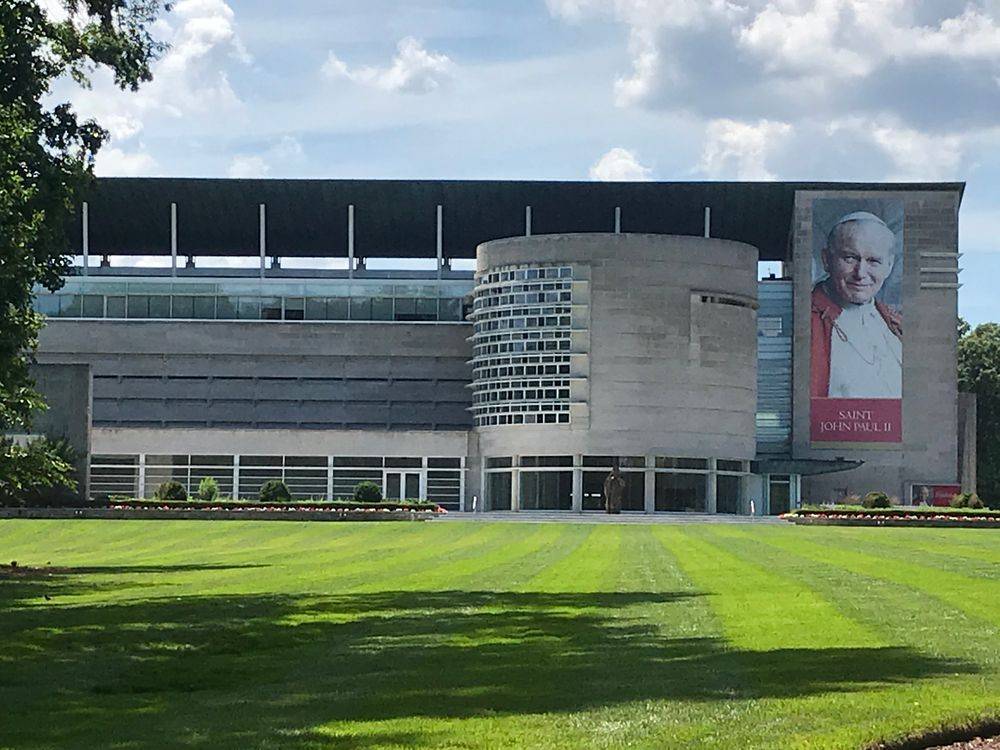 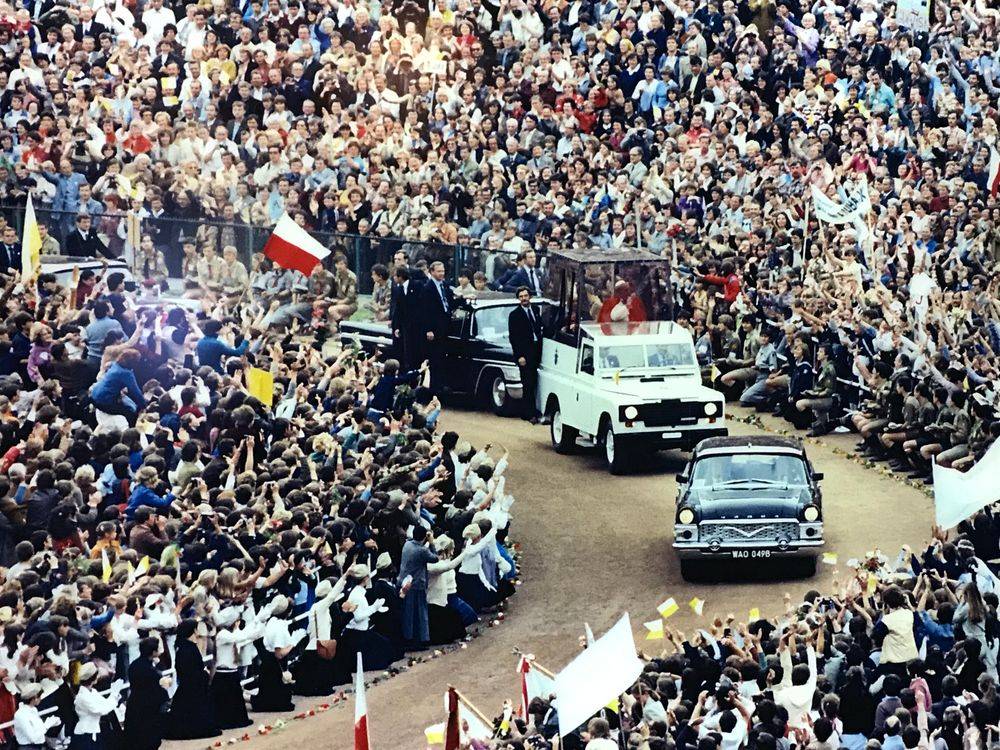 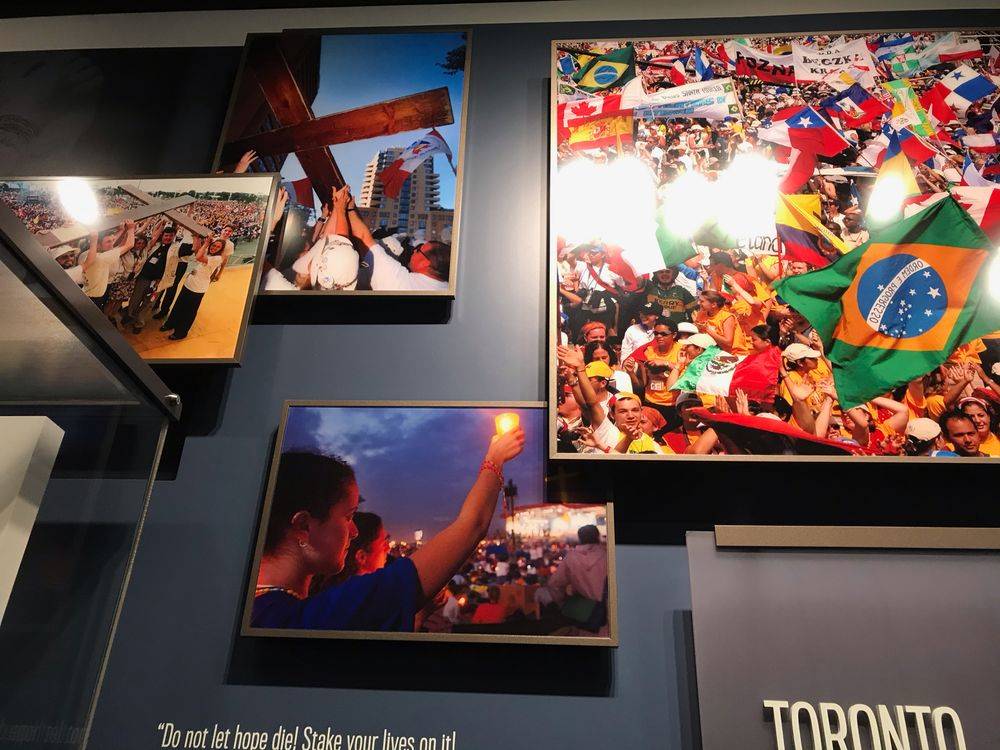 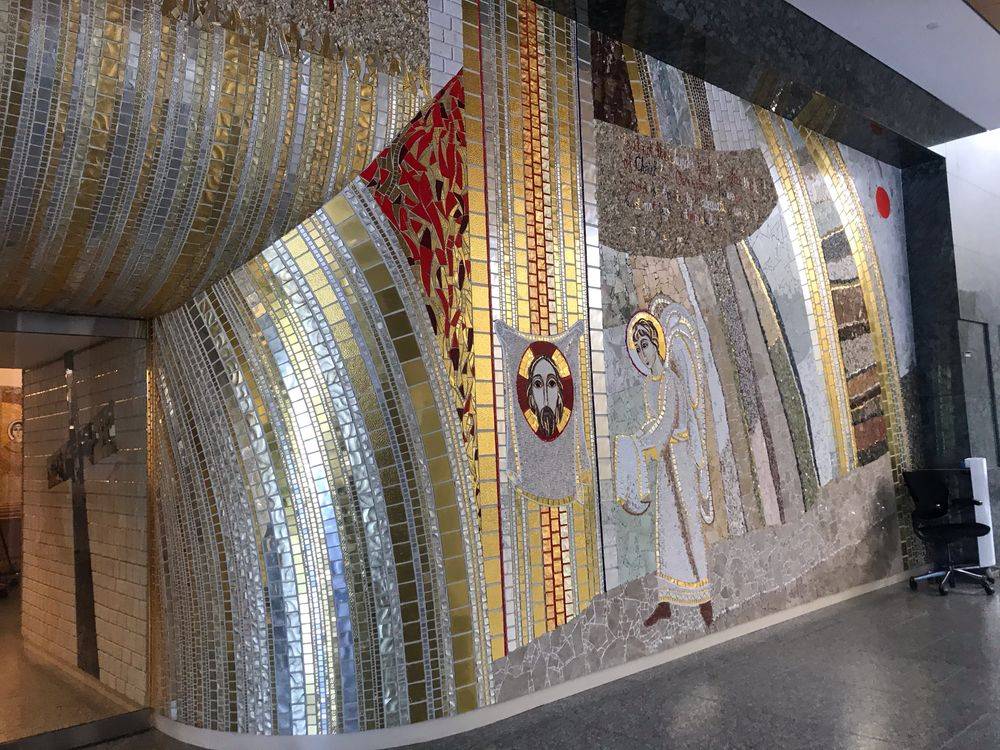 Day two of the experience brought Mullins Library - Room 214 - home of the rare books collection. I’ve always felt at home in a library. I love the very distinct smell that all book repositories seem to have, and I love the aisles and aisles of printed word. It’s a favorite happy place! To be invited to view, touch, and read from this impressive collection was unimaginable. It would not be an exaggeration for me to describe it as having an out-of-body experience. We saw ancient, hand-printed catechisms made of animal skins and leather, the oldest from The Council of Trent. Yes, you heard me correctly! The curator explained to us how modern ways of preserving history do not hold a candle to the papers, animal skins and inks of old. We explored, not only rare and wonderful catechisms, but mammoth-sized hymnals of prayer and Gregorian chant all crafted by hand and incredibly well-preserved. We saw the most exquisite Bibles and bindings; I didn’t know what fascinated me more, the covers, the paper, the artwork, or the actual printed word. I was mesmerized. In total, this rare book collection contains approximately 70,000 volumes, which the curator told us range from medieval documents to first editions of twentieth century authors. 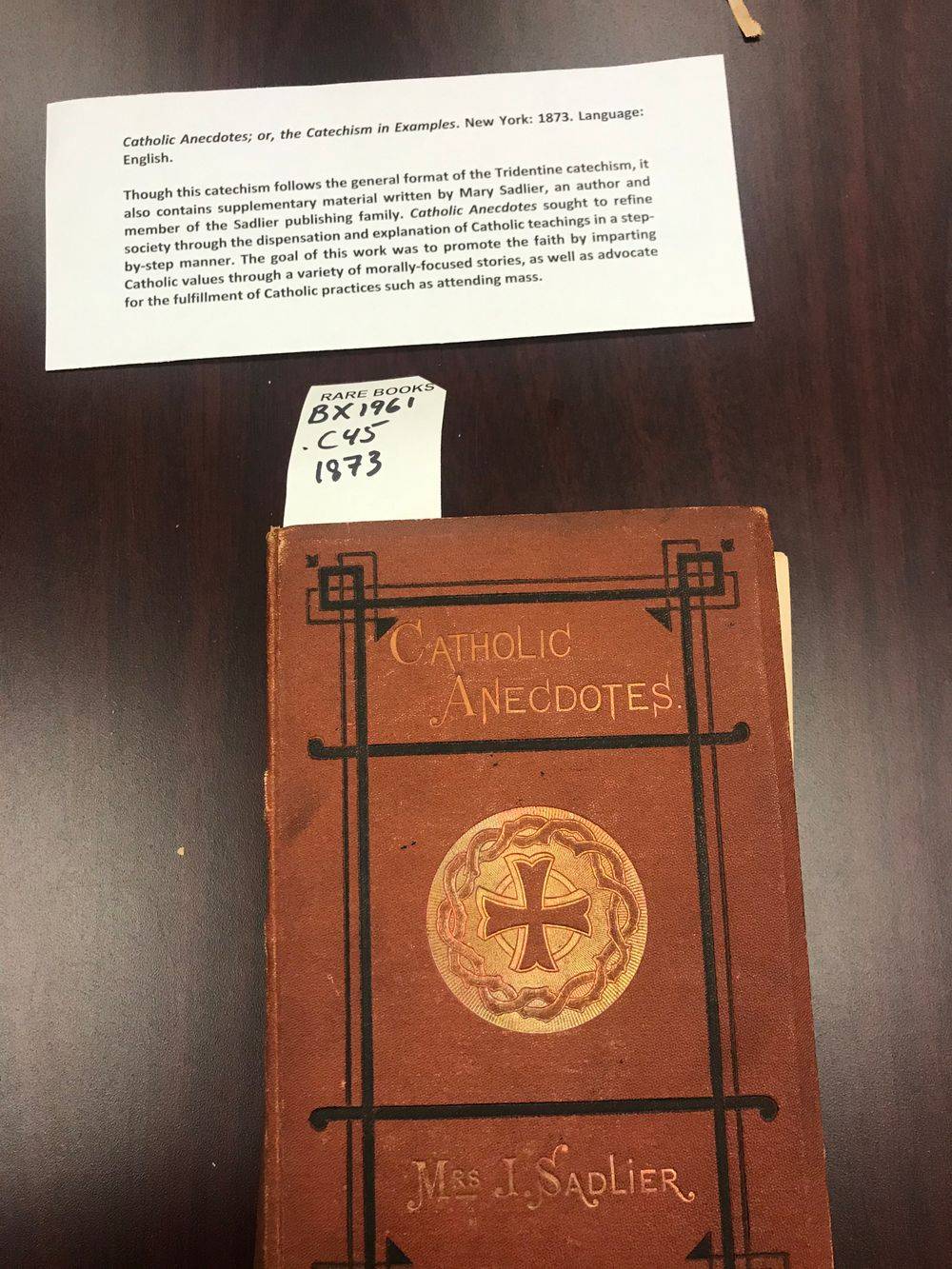 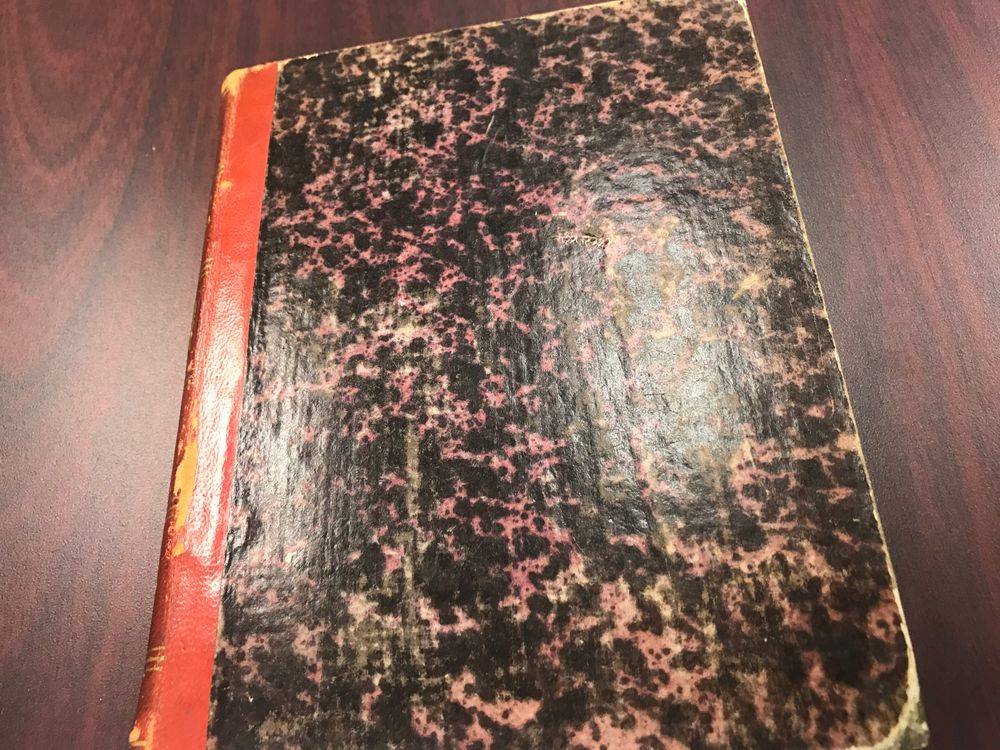 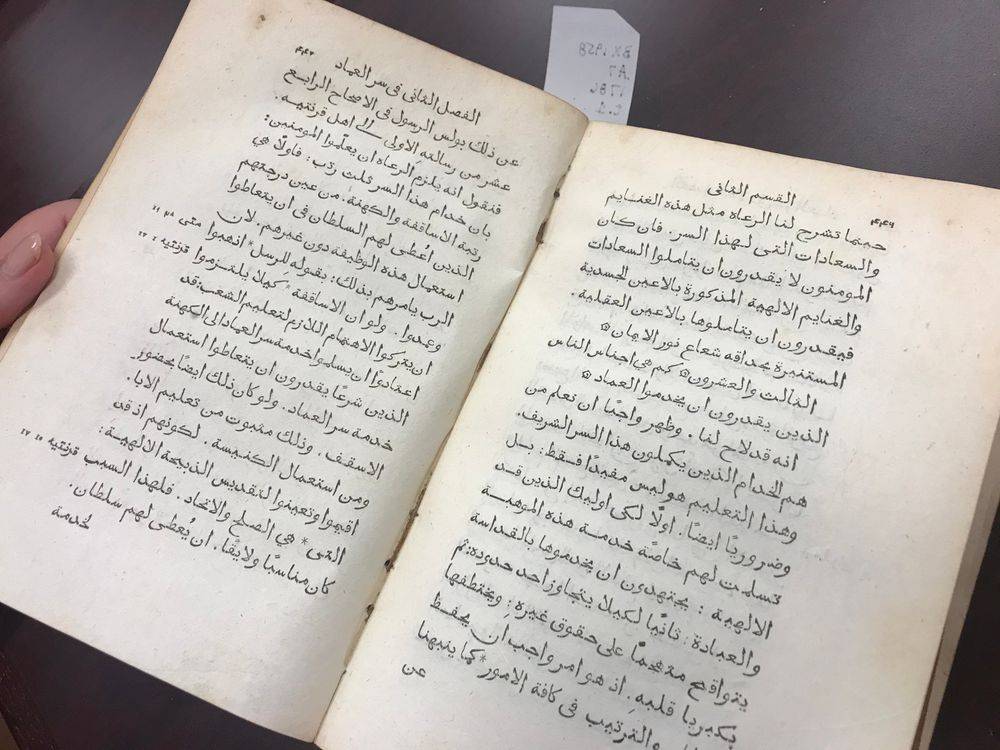 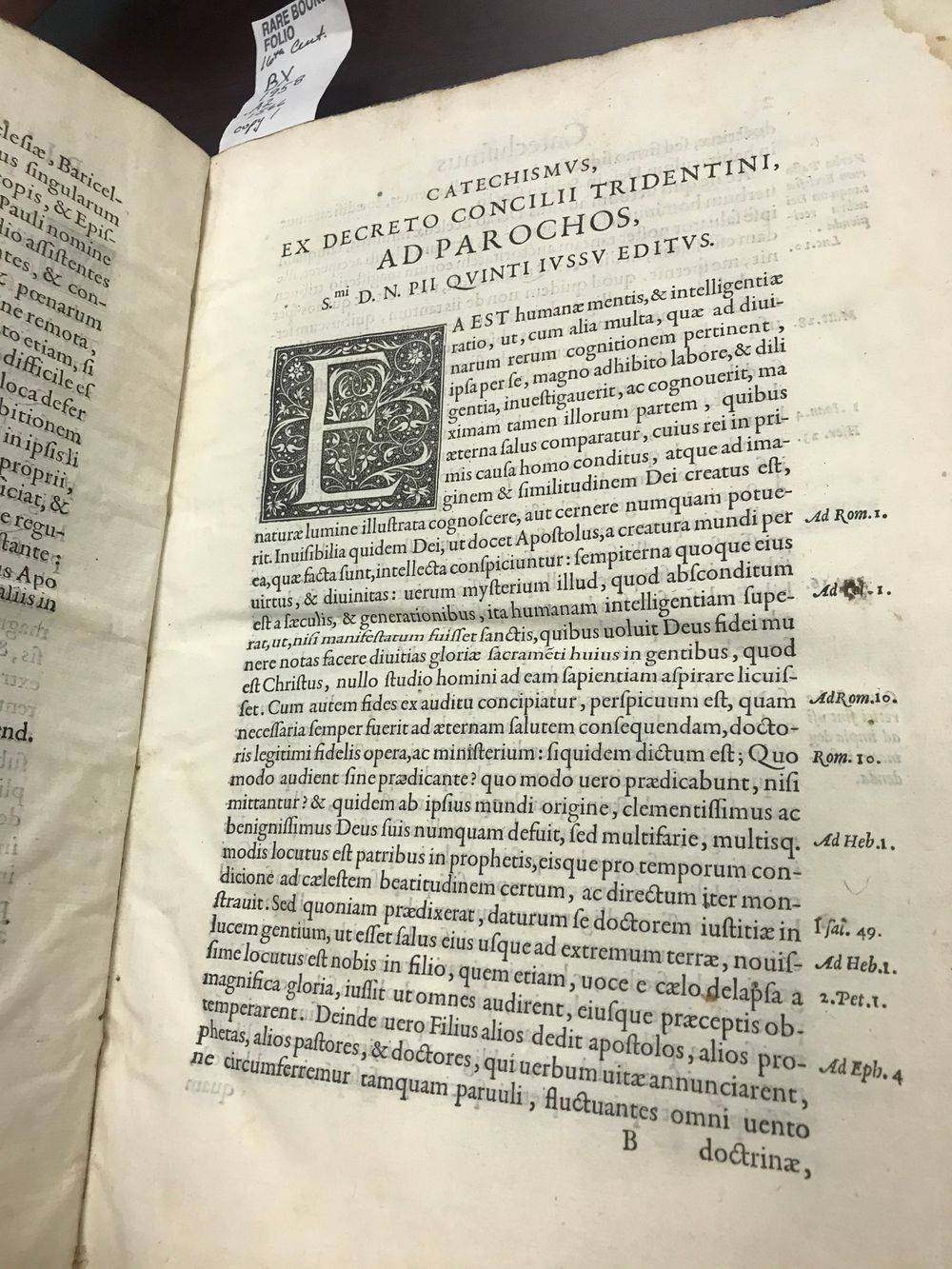 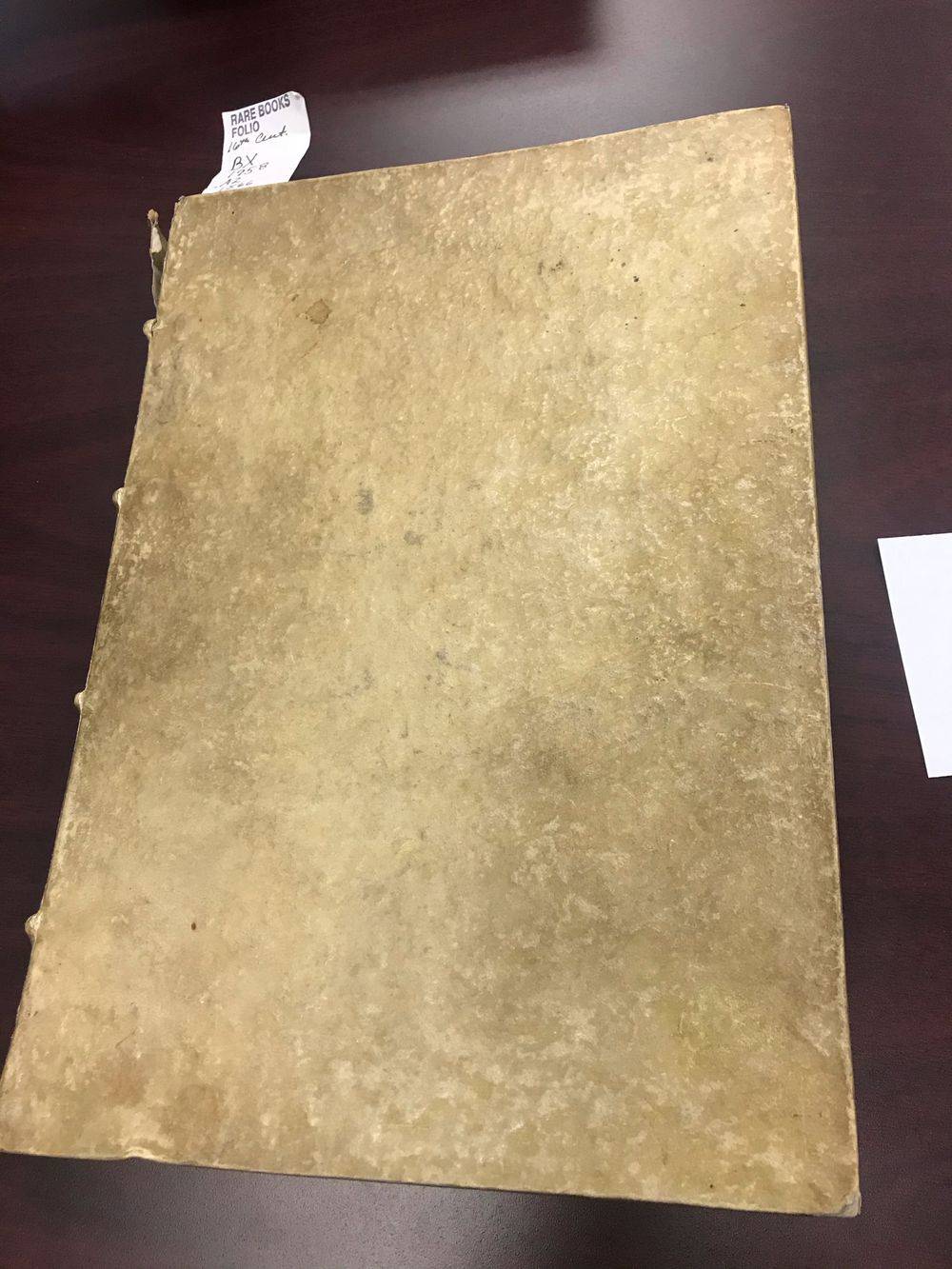 I thought it couldn’t get any better. But it did! The curator then shared with us something that had only been viewed by a select number of official university employees - a “precious piece of cinematic history” that had just recently been discovered...one of the blue-checked gingham dresses Judy Garland wore on the set of The Wizard of Oz! (She had five because of sweating caused by a hot set.) If you’d like to read the details about how Catholic University came to secure this dress (and you WILL), click here. If not, suffice it to say that Matt Ripa, Lecturer and Operations Coordinator at the Drama Department rediscovered it on top of the faculty mailboxes in a trash bag with a note attached sharing that he had found “this” in his office! Inside was a shoebox...and inside the shoebox was the dress!! Talk about God offering serendipitous delights of the heart! I can still remember as a child making an event of watching The Wizard of Oz and how we anticipated for days the thrill of viewing this classic from the encased box in our living room. I count it as one of my rare childhood thrills! And here I was...within inches of this iconic dress! I’m still pinching myself and asking, “Did this actually happen?” And could anything possibly top that experience? On a secular level...perhaps not! But on a spiritual level, for sure! Of course, standing in the center of the Basilica of the National Shrine was breathtaking in its beauty and splendor, and taking in the 70+ Marian chapels and oratories was uplifting and glorious. (We’ve already talked about the JPII shrine and Mullins Library.) But to be honest, it was attending daily Mass in the Crypt Church below the Basilica, participating in the sacrament of Reconciliation at a side altar, pouring over books in the library at the end of the hall where I lived for three days, and spending time in the Eucharistic Chapel at the Seminary that will be remembered as my highlight experiences. Those were the moments when I felt closest to God. Those were the places and spaces where I poured out my soul with tears at times, but also with laughter...and everything in-between. It was in these places where I sought the face of God and spent quiet time in His company. 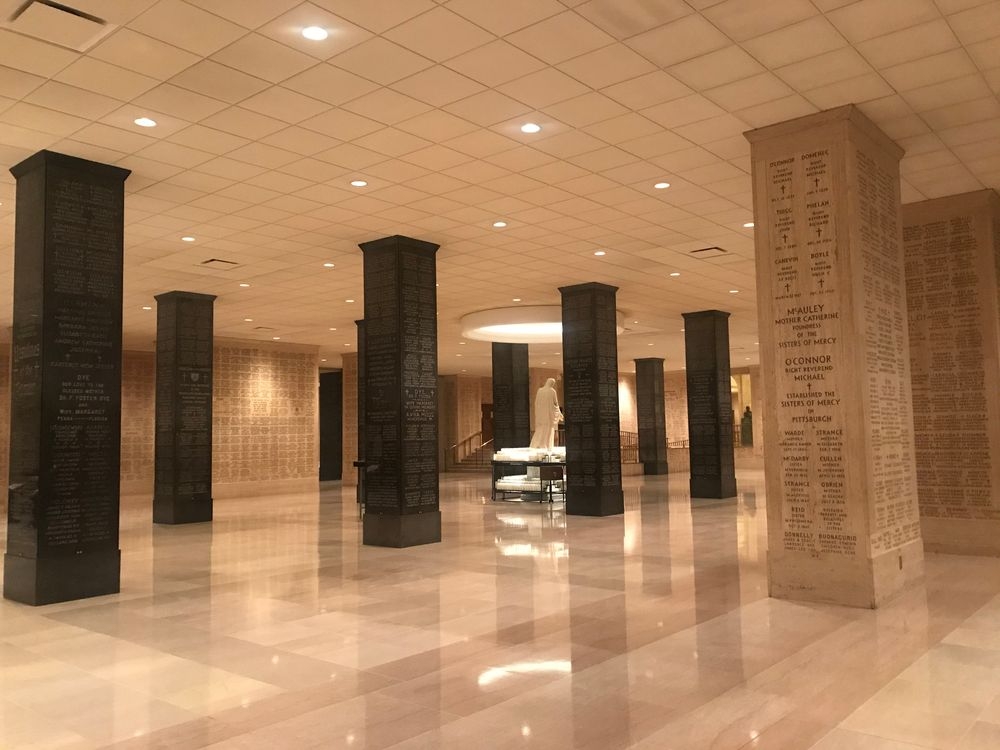 Prior to the trip, and probably the first time in my memory, I had communicated with God that I had no real expectations...that I wanted to be completely open and ready for whatever He might send...and even if I felt nothing, I would accept that “nothing” as His offering. Of course, I was secretly yearning for some special and specific “spark” to keep me focused and encouraged to finish the race. (Is it wrong of me to hope for a little interior nourishment?) But, as it turned out, as I sat in the seminary chapel doing my morning devotions one last time, it occurred to me (with a fair amount of melancholy), that I never did sense any particular spark.

Sure, I was a little disappointed, but as promised, I accepted the situation and gave thanks for all the beautiful moments I did enjoy and would pack away for further reflection. There had been some noted growth, rejuvenation, and some really wonderful experiences, and I was grateful.

It wasn’t until the final hour of the trip, as I was sitting at the desk in my room, waiting for my friend to return, that it came to me - the last couple of days had been an invitation to attend to my soul. And it doesn’t take a grand basilica, or a JPII shine, or even Dorothy’s dress to provide that spark! Could it be that all along, the “spark” I was secretly hoping for was the caring of my soul by enjoying the company of strangers, sitting quietly before God, reading a page from a random book, enjoying a cook’s hearty laugh, meditating on a poignant piece of Scripture, having a heart of gratitude for the coolness of air-conditioning, walking away from the structure and constant “doing” of my life? Unexpected in its simplicity amidst all this grandeur, perhaps that was my “spark”...the caring of my soul.