Shopping Cart
Your Cart is Empty
Quantity:
Subtotal
Taxes
Shipping
Total
There was an error with PayPalClick here to try again

Thank you for your business!You should be receiving an order confirmation from Paypal shortly.Exit Shopping Cart

This past Sunday our first and only grandchild was baptized into the Catholic faith and it brought a plethora of emotions as the reality of what was actually happening stirred my soul. What grandparent wouldn’t get excited about the prospect of their beautiful grandchild being welcomed into the faith of their family (in our case, Catholic)...being freed from original sin... receiving an indelible mark on their precious little souls...and becoming a new creation in Christ.

Sounds pretty amazing to me!!

The part that’s NOT so amazing is that we can’t actually SEE what’s going on supernaturally. We have to put some effort into the experience to better comprehend the whole thing. We DO get a few physical signs and symbols, and that helps: the cross (marking the imprint of Christ on the one who is going to belong to Him and signifying the grace of the redemption Christ won for us by His cross), a white garment (symbolizing the baptized person has become a new creation and has been clothed with Christ), oil (the Oil of Catechumens and Sacred Chrism...more on that later this week), water (the symbol used by the Church to send the Holy Spirit so the baptized may be “born of water and the Spirit”...more on that later as well), and light (coming from the baptismal candle, which is lit from the Easter candle, representing the risen Jesus, who is the light of the world [John 8:12]... as well as the flame of faith, which is to be kept burning brightly).

Of course there are other things we were all able to see and hear as well: the baptismal font, scriptural readings, prayers, parents and godparents, family members gathered, and so much more. 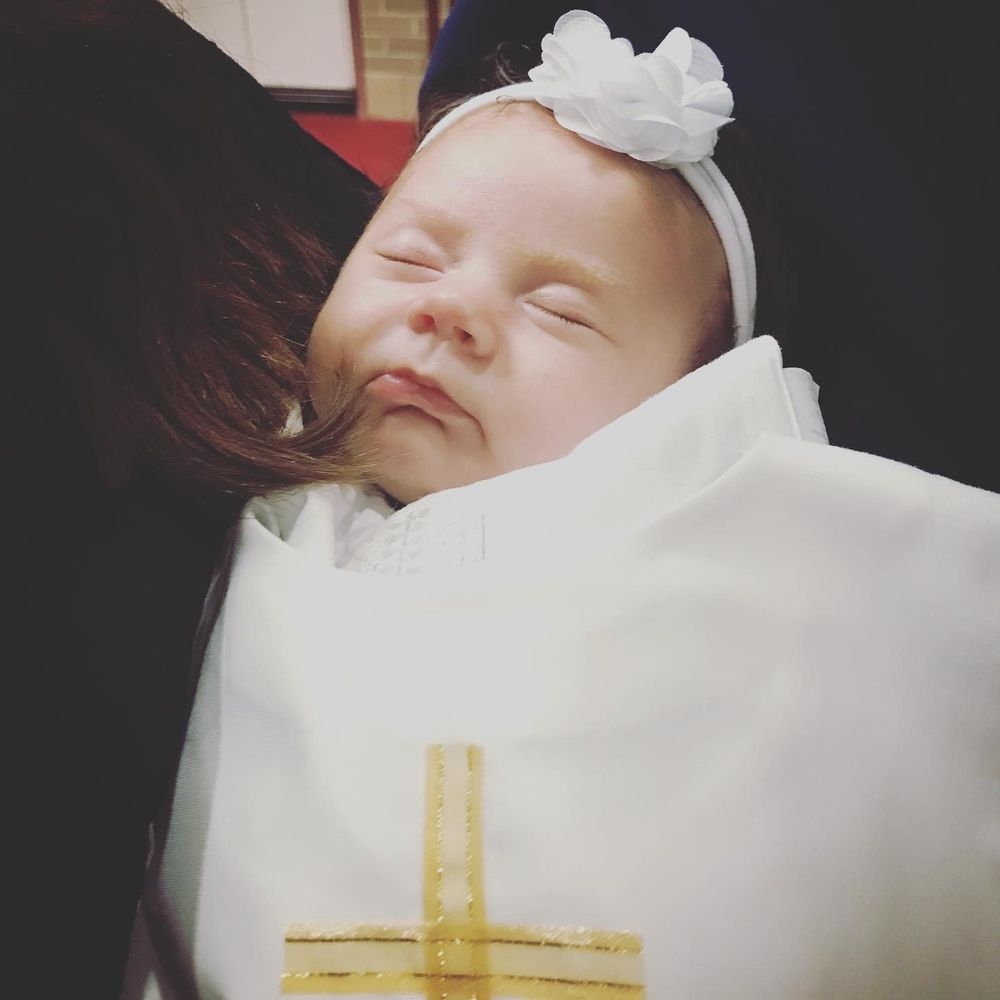 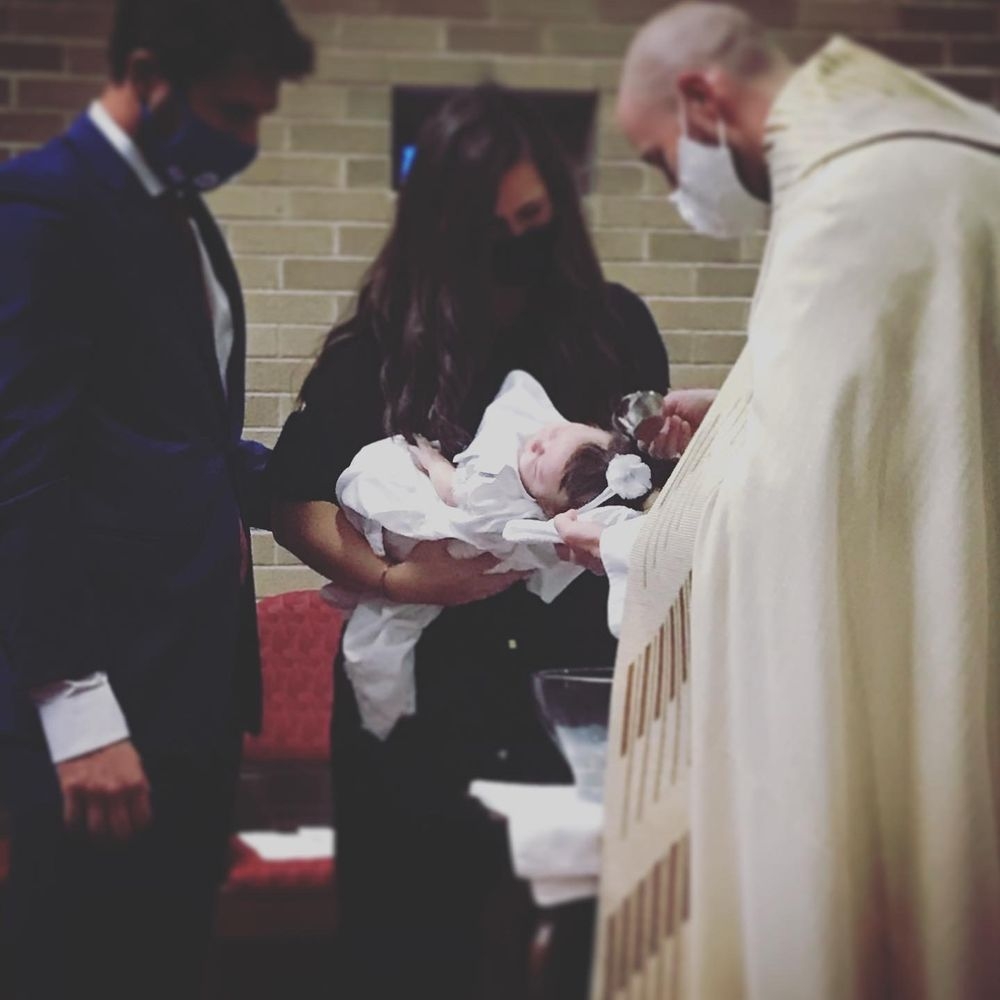 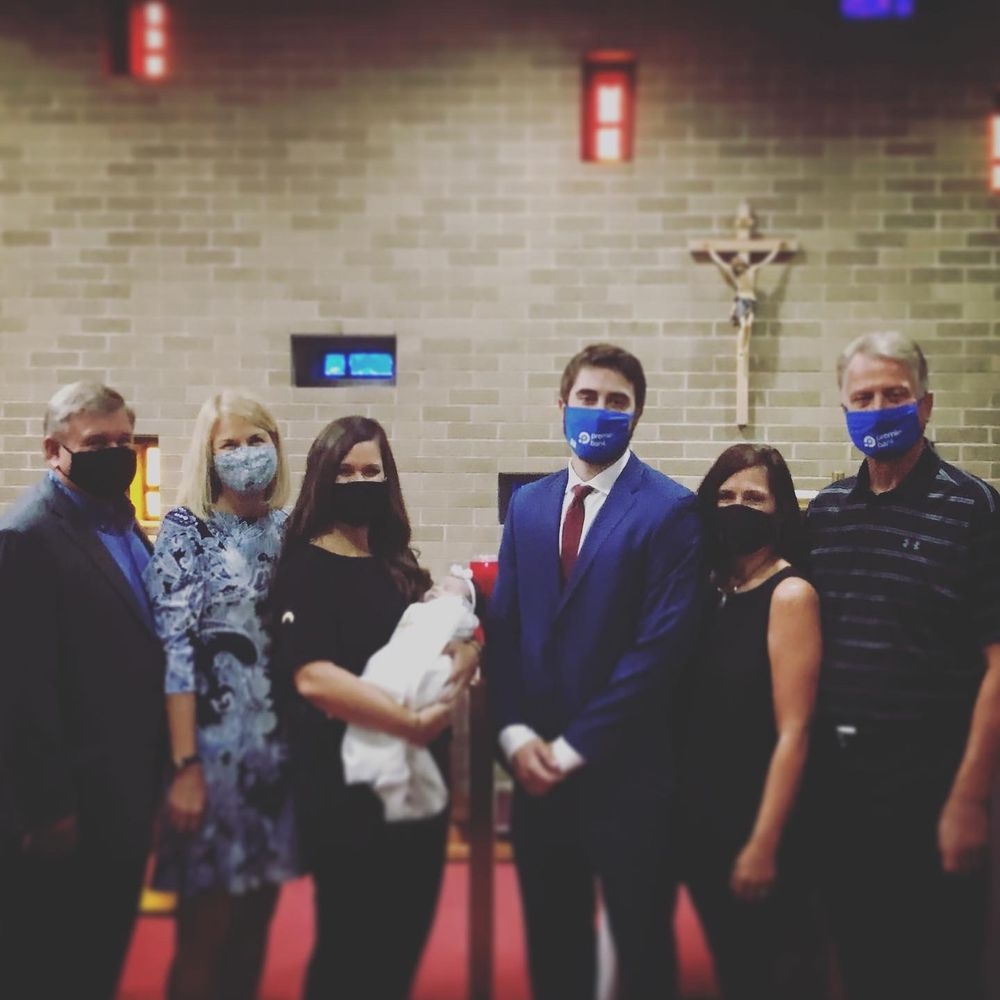 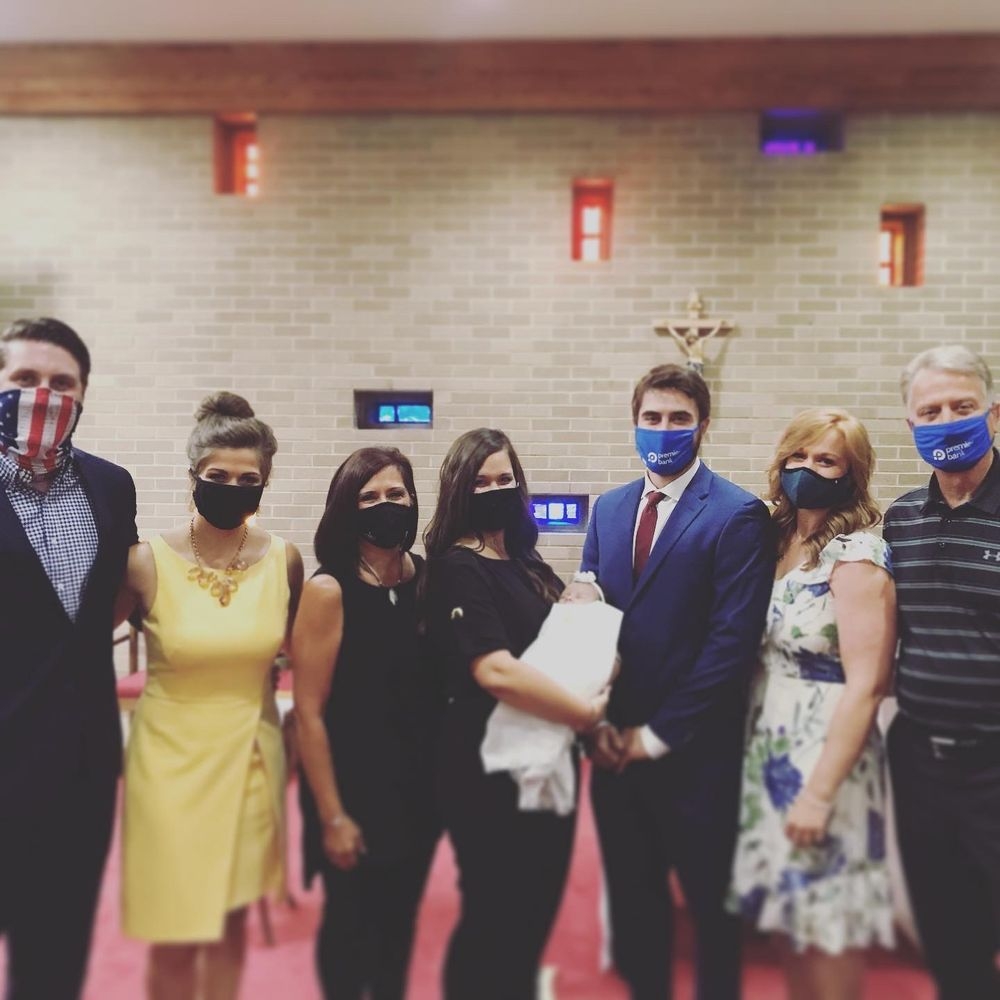 But my point is that we didn’t get to actually SEE Quinn’s original sin disappear and God becoming present in her soul. Irregardless, that’s absolutely what happened...and I got emotional as I used my God-given imagination to visualize the whole thing. Truth is, I was already crying in the car on the way TO the Baptism in anticipation of what I knew was about to happen.

I knew that our precious Quinn, and her cousin, Hattie (who was baptized along with Quinn), were going to become adopted Children of God (see note below) and heirs of Heaven. I knew that they would be receiving their inheritance at the very moment of their Baptism...and that inheritance would be ETERNAL UNION WITH GOD, which is beyond anything we can even begin to wrap our minds around.

So that’s exactly what happened on August 2, 2020 at approximately 1:15 pm. They both became a part of God’s team, which means they were given special powers and obligations to share in spreading the Good News of all things Divine...which is actually a pretty big and serious responsibility. (We tend to forget that through Baptism we SHARE in the work of evangelization...just in case you were thinking that’s solely the job of priests, pastors, deacons, religious and teachers of the faith.)

No worries! When God gives us a big job, He also equips us with the grace to handle it, and the best place to find that grace in the Catholic faith is through the Mass and the Sacraments. That’s one of the reasons I love to imagine, what I refer to as, sparkling fairy dust (grace) flowing into me as I process up to Holy Communion and receive the Body, Blood, Soul, and Divinity of Christ. I like to remind myself that something really momentous is happening...because, well, it IS!!!

What an absolute gift! And as the Catechism of the Catholic Church (CCC) says, “Baptism is God’s most beautiful and magnificent gift...We call it gift, grace, anointing, enlightenment, garment of immortality, bath of rebirth, seal, and most precious gift. It is called gift because it is conferred on those who bring nothing of their own; grace since it is given even to the guilty; Baptism because sin is buried in the water; anointing for it is priestly and royal as are those who are anointed; enlightenment because it radiates light; clothing since it veils our shame; bath because it washes; and seal as it is our guard and the sign of God’s Lordship. (CCC 1216)

I told my grand-daughter, Quinn, (in her card and also whispered into her ear), that we all enjoyed a big party in her and Hattie’s honor, but that she should always know that the true party was with God and the angels and saints at the baptismal font. (Again, if only we could have visually seen that sight...it was, for sure, mind-blowing!!)

I went on to tell Quinn that she had just experienced the most important thing that life will ever offer her, that, in fact, if anyone ever asks her what was the most important thing in her life that ever happened, the answer would be Baptism! It was, and always will be, the crowning event of her entire life because it made her an adopted Child of God. The same holds true for each one of us who have also been baptized. I’ll say that one more time: There will never be a greater event in your life than your Baptism! That being said, I hope you know what day you were baptized and that you’ll find a way to celebrate it in some small or huge way if you’re not already celebrating!

If you, too, want to start celebrating the most important day of your life and have misplaced your baptismal certificate, save yourself the time and simply call the church. Then join the party by thanking and praising God for becoming a new creation in Christ!

NOTE: We are called “adopted” Children of God because we are adopted into the family of God. We can’t be born into the family of God because we’re human and God is divine. So, through Catholic Baptism, a Christian’s immediate spiritual family is God the Father, Jesus, God’s son and a brother to all, and Mary, the Mother of Jesus and a mother to all. And every one who was, is, or ever will be baptized becomes their extended spiritual family. Catholics believe that Baptism makes all people brothers and sisters in Christ, whether they’re Catholic, Protestant, or Orthodox.